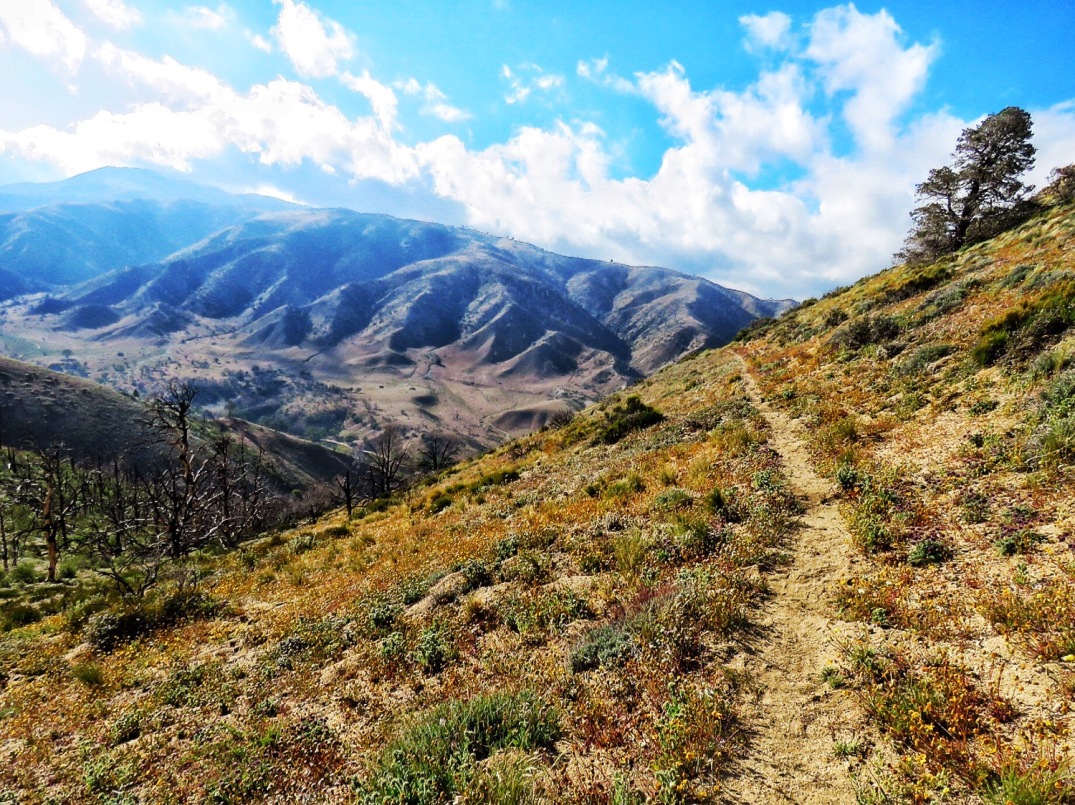 I woke a few times in the night .Wrestling  down the tent flaps . Winds i havent experienced since the night at Ziggy and the Bears . So i enjoy the ‘lull’ early morning . The moon is still up and the sun not yet putting in a full appearance . So the sky is a dark dark blue , with the promise of orange at the edges . I smile as i stir my porridge . Im looking forward to today . It looks like a straight forward hike to Tehachapi . I dont think i will make it all the way today as its thirty plus miles , but there is a nice campsite close to the highway and so i plan to hitchhike in tommorow morning and resupply . Its the last big town for at least a couple of hundred miles , so this is an important hiker hub .

Ive been watching the Windfarm and generators  get closer and closer , and by second breakfast time im in the heart of them . They ‘whoop,whoop’ and are pretty spectacular in an alien scfi kind of way , but only for so long . The other downside about hiking through a windfarm is , well , the wind .. Blimmin ‘ek .. The WIND . I walked at about 45degrees most of the morning , consoling myself that at least i was exercising some new muscle groups .   At lunch i dropped down to a spring in a gorge , where it was blissfully windless , and there was Guss , he’d headed off early yesterday , so it was a nice suprise to have company and a catch up , fill up our water and have a cup of tea (im trying to culture the natives) !
Later , more wind farm ,more wind turbines and more wind . Much much more wind . I get my Hilaryscottcousteau head on and push ever onwards , ever upwards , towards the looming summits . It does feel like an achievement facing such resistance on a pathway . The day to day winds that hamper and hinder . Winds of distraction , winds of confusion , winds of change . How do i deal with the winds on my pathway ? Often the distractions seem to engulf me , advertisments , telemarketing, too much choice in the supermarket .. It all chips away at my defences . It all trys to take away my precious time . How can we walk through these winds and remain entirely ourselves ?   The windturbines are earning their money today ‘whooop whhup whup!’
I realised a long time ago that the wind is never going to stop in my life.It is a constant of nature. I know that I can be its ‘victim’ or just accept it and ‘get on with it’ . I like the way that the wind has left my face nowerdays , carved with its character .
I motor on , enjoying brief moments of the wind being behind me and having the distinct sensation that im flying .. So , even wind has its upsides.  Later having cracked out a plus thirty mile day im standing on the side of the highway with my thumb in the breeze . I get picked up and ride in the back of the truck with the backpacks . Im elated to think i will soon be in a town and eating Pizza and washing it down with some amber nectar .

So im a bit disconbobulated to find my creditcard getting bounced .. Not once , but thrice ….  Ahhahahahrghghghhhhhh ! To say the least .

But get this , get this ! The lady in the chevron garage phones the local officer , who comes straight over and gives men a coupon to use at the local motel . Ive been kindly put up care of the Sally Army tonight . OK im not exactly a vagrant or a stranded motorist , but I am grade A ‘Hiker-trash’ and so that must count here .

Officer Bruce gives me a ride to the Motel Santa Fe in the back of his squad car . Im totaly and deeply in childhood fantasy land . I am both Starsky and Hutch and Chips and Kojak all at once . Officer Bruce apologises that the seats in the back aernt comfortable .. Yeah yeah its not a Damler .. Its BETTER !!

Tonight with a can of donated beer and a bag of crisps . I sew on patch four .. Im so tired i have a bit of a wobble and realise im dehydrated . Time to get into Uncle Ned .

Did i mention the wind turbines ..